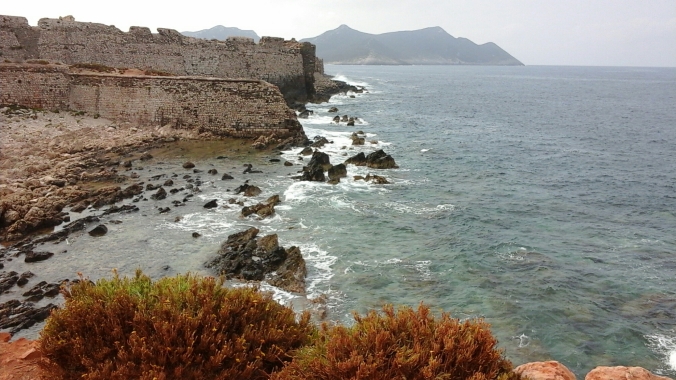 It’s cloudy in August about once every 2 years,  so we decided to literally take the high road and visit the savage part of Methoni, near the place where it all apparently began in the 14th century. We decided to remain outside the castle and take pictures of the wild thorny growth overlooking the omenous turbulent waters neighboring the fortress. The tour bus was there before 9 and the first batch of tourists were already exiting the castle. 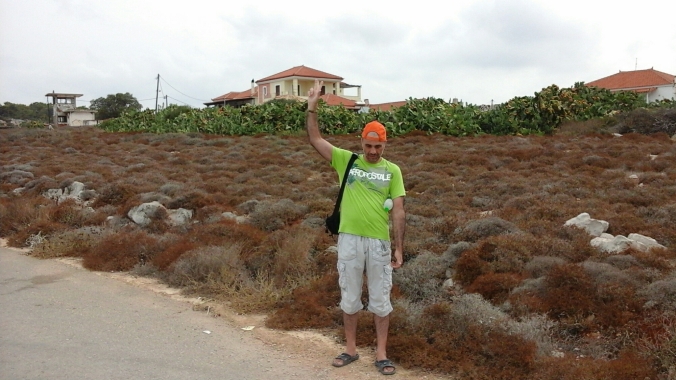 Just next to the roadabove the shrubs are tons of prickly pear trees in full fruit bloom. Above is yours truly at the beginning of the journey.  I had a Gothic feeling in me, something somewhat less than tranquil but content that I existed with nature.  I know I had my phone and tablet, but how else would I have brought you all this?

A couple of construction workers were trying to beat the rain by hurriedly working on a roof overlooking all this wave bashingly time warped top of the hill. It was a small gorge that caught my eye and and even smaller canyon that had remained intact for 700 years. Nothing much has changed.

And yes, a couple of hours of this deserves a pre -lunch lager at the town’s best watering hole,  Dourios Ippos (translated as the Trojan Horse ). This is a great place any time of the day or night where Iraklis  (translated as Hercules,  if you catch the unintended culmination of many things in this post ) and his staff treat you like royalty.